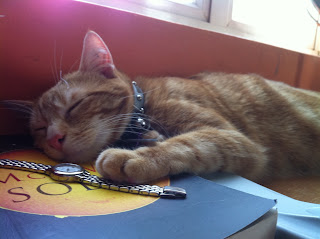 Ian McEwan is the only author whose books I refuse to buy on my Kindle. When Solar was released earlier this year, I went out to the bookstore and bought a hard copy of it so I can display it on my bookshelf along with the rest of his books. Not because I am vain about my book collection, but because I feel, rather absurdly, like I'm doing something for him in my own small way. No no, Ian, thank YOU.

For the reasons stated here, On Chesil Beach remains my favourite McEwan novel.  Notwithstanding, Solar was wonderfully enjoyable and well worth writing a review about, so here goes. My maiden attempt.

Solar is about an over-the-hill Nobel-prize-winning physicist, Michael Beard, who has 5 ex-wives. It tracks his part-hilarious, part-chilling and part-tragic collection of escapades over the course of 10 years, zooming in 3 times - at the start, in the middle and at the end of those 10 years.  You'd think that such a structured structure lends itself to the typical 3-stage story-telling formula of beginning, climax and denouement, but no. McEwan leaves the climax for the very end, and finishes off abruptly.

Is McEwan saying to creative-writing lecturers, screw your 3-stage formula? In a way, yes. But wait -

Solar is, in fact, a study on Plot. Specifically, the art of plot twists. McEwan, so painfully good at character study, has now given Plot, that poor creature forever marginalised by lit professors, its fair share of the limelight. And why should it not take centre stage for once? It is after all the backbone of most literary works. And so, Solar's main story and its sprinkling of little anecdotes, is, every one of them, a deft, delightful irony.

This feels like an exercise in intellectual and creative gymnastics from McEwan. He's kinda showing off. For example, one of the mini-events that take place is distinctly unoriginal. It feels like I've heard the story somewhere else before. Without giving away too much (I hope): Beard munches on his potato crisps and takes offence when a fellow commuter starts eating those crisps without his permission. He gets angrier and angrier when the other fellow keeps taking his crisps. The final straw comes when, both parties having finished off the bag of crisps, Beard gets up to leave and the other guy cheekily helps him with his bag. He snatches his bag and stalks off. Later, he discovers his own bag of crisps, unopened. All along, he had been eating the other fellow's crisps!

By right, I should be feeling vaguely unsettled and wondering where on earth I've heard this story before. And I am. And yet, McEwan weaves his narrative so fluidly, believably, almost offhandedly that I forget it's a familiar story and am greatly amused and feeling faintly sympathetic towards our bumbling protagonist. And then, McEwan, with a remarkable backhand, has Beard incorporating the story into a speech he's giving, only to have someone else comment on the fact that that is an oft-told anecdote, pointedly doubting Beard's re-telling of events. By this series of events, McEwan has actually involved me, the reader, in the irony.

McEwan, a true master at his craft, twists and turns through his narrative. He keeps us turning the pages, sometimes laughing at, more often being disgusted with this brilliant stupid commitment-phobic desperado of a protagonist. He makes us wonder at the crazy way in which this guy seems to get away with being a complete jackass. He surprises us with the amount of sympathy we have for this loathsome character.

Then, he archly avoids the common twist-at-the-end, as the reader finds himself staring down the barrel of an inevitable and unsurprising conclusion. Shocked, even though we should have seen it coming. And ever so suddenly, there are no more pages left to turn.

Ian, you are the bloody reason why I cannot bear to write my own book.