Battle Hymn of the Tiger Mother by Amy Chua 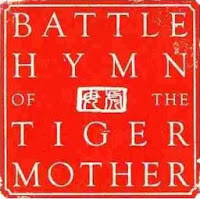 The first time I read the Wall Street Journal excerpt from her book (which can be found here), my eyes popped out. Here's a Chinese mother (in Chua's words, not mine) brazenly flaunting her own perverse child-rearing techniques, something that most other Chinese mothers would rather keep under lock and key. It was like reading a juicy tabloid magazine without having to actually stoop to reading a juicy tabloid magazine! My curiosity piqued, I read and reread the article about 5 times, then googled her name, and lo and behold - there were about a million commentaries about the article and the book itself.

So the kindle edition of the book just "one-click" away, I downloaded it and did not stop reading until I finished it. Took about one half of a lazy Saturday.

Amy Chua does not write particularly well. She uses some seriously disturbing stereotypes as if to justify her mothering style by lumping herself with other Chinese mothers. She traverses a very thin line between irony and sensational truth, making the reader very often unsure about whether she is joking or crazy. But what Chua is exceedingly capable at is drawing out the voyeur in you. She reveals her mothering tales with a shocking and compelling candour. You may disagree with her methods, but you just can't put the damn book down!

Assuming everything in the book is true, the Amy Chua I got to know by reading the book is somewhat  two-dimensional, but not altogether unlikeable. Perhaps because of the subject matter, her character was defined by her role as a mother, and not much else. But she deserves my grudging respect for two reasons. One, her determination. This woman is tenacious. She does not give up, nor does she let her kids give up. To a degree, I agree with her when she says:

"Western parents worry a lot about their children's self-esteem. But as a parent, one of the worst things you can do for your child's self-esteem is to let them give up. On the flip side, there's nothing better for building confidence than learning you can do something you thought you couldn't."

But I also think that it is important to know when to let go. This, we learn, was a costly lesson for Chua. Which brings me to two, her self-awareness. She knows and admits that she is kinda crazy. But the illumination is more distinct towards the end of the book - she describes a scene (which really, we are all waiting for) where her younger daughter has a massive tantrum and culminates in Chua being forced to reflect and concede. It is admirable that she is capable of reining it in after all that relentless drive and hubris.

Ultimately though, I am glad my own Chinese mother did not have the iron grit exhibited by Chua. I consider my mum to be pretty strict but then again, I never really studied hard, quit piano, quit ballet, quit swimming. I never ate vegetables. Come to think of it I actually remember having a long battle of wills at the dining table over the vegetables left on my plate and emerging victorious. Now though, I do eat some vegetables, am capable of enjoying my own unique and constipated style of piano-playing, and can pull a pretty mean front crawl stoke in the pool. We are the sum of our years, and as my mother rightly observed, being able to play at Carnegie Hall at 14 doesn't mean you're set for life. Life - which requires a lot more of you than what you can achieve by rote practice practice practice. Which somehow teaches you much more when you fail, than when you succeed. Which really should be enjoyed, while there is still time.
Posted by Vanessa Yeo at 00:18

Email ThisBlogThis!Share to TwitterShare to FacebookShare to Pinterest
Labels: Non-Fiction