On Chesil Beach by Ian McEwan 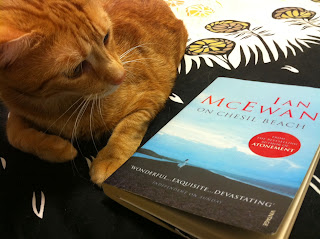 My copy of On Chesil Beach has this description by the Independent on Sunday on its front cover: "Wonderful...Exquisite...Devastating". I can't think of three words that are more apt for this novel.

This is a monumental endeavour.  Though he makes it look easy, McEwan sets out to capture, in a mere 150 pages (or thereabouts), a turning point.  The separate lives of Edward Mayhew and Florence Ponting have brought them to where they are now; we see how they grew up, how they met, how they fell in love.  Perhaps we might think that their lives were too divergent to now run in parallel, but here, at this brief but important intersection, the split-second decisions they make, right down to the words they choose, will chart the course of their lives permanently.

Most of the novel takes place within a very short and compressed space of time.  It is set in England in the early sixties.  Edward and Florence are in a hotel on Chesil Beach on their wedding night.  They are happy and very much in love, but they are both virgins, and each have their own private and conflicting fears about the consummation of their marriage about to take place that night.  The opening words of the novel set the scene:

They were young, educated, and both virgins on this, their wedding night, and they lived in a time when a conversation about sexual difficulties was plainly impossible.  But it is never easy.

I was curious about those words - But it is never easy - a lost little opinion that didn't seem to belong in the otherwise removed narrative of the opening paragraph.  More on this later.


Edward and Florence's problem, on this pivotal evening, is what I refer to as the "sex dichotomy". To put it euphemistically, Edward is raring to go, champing at the bit.  At the other end, Florence is skittish, reluctant.  It is a simple matter of biology, this libidinal inequality, but it must be the cause of many a bedroom conflict.  I have no idea how McEwan managed to get into a woman's head in order to voice Florence's thoughts with such excruciating accuracy:

She wanted to be in love and be herself.  But to be herself, she had to say no all the time.  And then she was no longer herself.

On the other hand, Edward is not exactly schooled in the art of subtlety or restraint:

When Edward drew Florence into his embrace, it was not to kiss her, but first to press her body against his, and then to put a hand on her nape and feel for the zip of this dress.

So it's inevitable that conflict arises.  The quarrel escalates quickly, as the characters descend into cruelty and ugliness without quite intending to.  She says he's disgusting.  He calls her frigid.  We wonder how two people who love each other so much can hurt each other in equal measure.  Finally she extends what she thinks is an olive branch, but he takes it as a slap in the face.  Thereafter, a parting of ways.

Chesil might at first blush seem to be be about sex, but there is much more to it than that - it is a close study of what happens behind closed doors, the thrust and parry of a quarrel, and the momentous consequences of one wrong move.  This might sound matter-of-fact, but truly it is heartbreaking, because of the regret that follows, and the fact that there is no turning back:

All she had needed was the certainty of his love, and his reassurance that there was no hurry when a lifetime lay ahead of them.  Love and patience - if only he had had them both at once - would surely have seen them both through.


Close to the end of the novel, at the very last paragraph, we hear that didactic voice again:

This is how the entire course of a life can be changed - by doing nothing.  On Chesil Beach he could have called out to Florence, he could have gone after her.  He did not know, or would not have cared to know, that as she ran away from him, certain in her distress that she was about to lose him, she had never loved him more, or more  hopelessly, and that the sound of his voice would have been a deliverance, and she would have turned back.

This, together with But it's never easy in the first paragraph, draws the novel into the territory of universality.  It speaks to those who struggle with the same issues faced by Edward and Florence even today, and to those who have said terrible things only to regret them later, as if to say you are not alone.

You might say that Chesil  was written for a hopeless romantic or a tragedy junkie.  But for me, it is one of those rare, thrilling works that you devour at one sitting, then forever look back on it trying to conjure up, without success, that precise feeling of complete satisfaction.
Posted by Vanessa Yeo at 23:33