I am ashamed to say that in all my years of living in Sydney, I never picked up a Tim Winton novel to read. And that Cloudstreet, my first Tim Winton, was bought at the Sydney Airport, as I was just about to get on a plane to start my life back in Singapore. 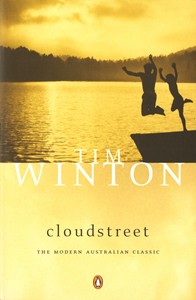 I'd always scoffed at the thought of Aussie literature. Despite friends recommending a whole host of great Aussie novels, I resisted. I was a foolish snob. Thankfully, the beauty of books is that they never expire. A good book will sit there, faithfully waiting for you to pick it up, realize its worth, and devour it. Better late than never. I've learnt my lesson.

I think I will always remember Cloudstreet as the book that made me ache for Australia. It is quintessentially Australian, and for every reason that I thought I would hate this kind of book, I loved it. I shall now, as a form of atonement, list those reasons here.

If you've lived in Australia, or even elsewhere, you would have heard of Neighbours. It's one of the longest-running soap operas around - both the writing and acting, as you might imagine, is cringeworthy - and it's still going.  I used to think that every Australian book about an Australian family would be some version of Neighbours, and that put me off.

Cloudstreet has, in fact, been compared to Neighbours. I can see why that's tempting - both are sprawling family sagas. Cloudstreet portrays the crazy messy life of two families (the Pickleses and the Lambs) living under one roof - each of the main characters is in turn good, bad, strong, weak. Sometimes fortune shines down, sometimes calamity strikes. In the midst of pain and heartache, two of your favourite characters will fall in love, marry, have a child. The house itself is a character in the novel, and exerts an ethereal influence on its inhabitants. Yup, this could have been fodder for Neighbours writers.

Yet how do I even begin to describe how Cloudstreet is not Neighbours? For starters, it is not cute; it is not camp. The story progresses in the same way that life does. It captures the day-to-day, the mundane, without being boring. See here:

Some nights Dolly wakes to the strangest hum in her ear.

A postcard comes from Quick. I'm alright, it says, Love Quick. The postmark is smudgy. The picture on the card is of Wave Rock, that grey curling wall like a petrified lava breaker. The Lambs stare at it and keep their thoughts to themselves.


Lester adds up his age one evening and is surprised how old he is. I'm not young, he thinks. My life isn't ahead of me. He buys a camera off a Balt at the growers' market to make a record of things.

Chub Pickles announces he wants to be a jockey. At sixteen he weighs fourteen stone already. He likes to eat pork fat before it's cooked, and he often casts a hungry eye at the pig across the fence.

The pig grumbles and shits irritably.

The house sighs in the night but no one lets themselves listen. Except Fish.

It is the very antithesis of that which can fit itself into a million 22-minute episodes.

I couldn't help but assume that an Aussie novel would be set against the backdrop of a harsh, dry, scorched-orange landscape. Just thinking about it made me feel thirsty and uncomfortable. It is oppressive. Never mind that I myself have never travelled into the bush before, or that I know the continent is made up of more than just desert.

When I read Cloudstreet, that parched dry feeling did not leave me, despite the fact that it is not set in the bush and the theme of water is strong and recurring. Fish Lamb nearly drowns, and is forever drawn to water. Sam Pickles' dad is a water diviner. Quick Lamb and Rose Pickles fall in love on a boat.

Perhaps it is because Tim Winton peppers the novel with descriptions of the hot, muggy summer days. It seems that most things happen during the summer.  Take this passage, that I found just opening the book to a random page:

Summer came whirling out of the night and stuck fast. One morning late in November everybody got up at Cloudstreet and saw the white heat washing in through the windows. The wild oats and buffalo grass were brown and crisp. The sky was the colour of kerosene. The air was thin and volatile.

White heat, check. Brown, crisp grass, check. Bushfires not far off, check. I'm starting to sweat. And yet, reading Cloudstreet I embraced it. It is probably because Winton does too. Over the page:

3. Words that exist only in the Aussie vocabulary

When I first moved to Australia, these words irritated me. Because they reminded me of what an outsider I was when I had to ask "what does that mean?"

But having left Australia, I miss them. How could I not? Random extracts from Cloudstreet:

Fair Dinkum!
Gis a coupla brownfellas, Macka, and something for the flask, orright?
Don't chiack around about it. I'm serious.
Are you gunna dob on me, Beryl? Is that why you're here? I haven't got a brass razoo if it's money you're after.
You crook?
Don't be a drongo, Quick.
Just wear it. Not now, you nong, wait'll I get you in the boat.

Throughout the novel, Winton preserves every sleight of tongue by spelling phonetically and uses with blessed lack of restraint an array of australianisms. I love how Sam Pickles refers to luck as the hairy hand of God. It gives Cloudstreet a unique flavour and reminds me of my affection for a weird and wonderful people.

Cloudstreet rightly deserves its place among the great Australian novels. Those of you who think you know Australia and Australians, think again. Then go read Cloudstreet.
Posted by Vanessa Yeo at 15:41