The Elegance of the Hedgehog by Muriel Barbery

(Translated from the French by Alison Anderson)

The premise of this book is deliciously enticing. 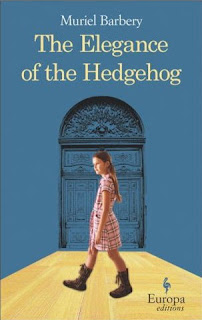 Renee Michel is a fifty-something concierge of an elite hotel particulier for the extremely wealthy at 7, rue de Grenelle. She fits perfectly into the stereotype of what an elderly female concierge should be. But that's because Madame Michel makes a concerted effort to appear that way. In fact, she is an avid lover of art and literature, well-versed in philosophy and a language pedant. She strenuously, ingeniously and very funnily conceals this aspect of herself. Deep down she has a mortal fear of being discovered traversing beyond the constraints of her social class.

Paloma Josse is a twelve-year-old inhabitant of the building. She is intelligent beyond her years and has figured out the charade of adulthood - that we are children all, unaware that we are trapped in a goldfish bowl. Consequently she embraces the meaninglessness of life and has resolved to commit suicide, and, in a symbolic attempt to escape the goldfish bowl, burn down the apartment. Paloma too tries to hide her intelligence by donning a cloak of mediocrity. She resorts to hiding in order to pen down her thoughts in her diary. To which we are, happily, privy.

The narrative alternates between Madame Michel and Paloma.

Halfway throught the novel, Kakuro Ozu, an elderly Japanese man, moves into the building, and upon meeting Madame Michel and Paloma, is immediately able to discern the true person beneath each of their surface pretenses. He is intrigued and intuitively reaches out to them. At one point he says to M. Michel, when she comments that the residents do not recognize a well-dressed her: "It is because they have never seen you. I would recognize you anywhere."

The latter half of the book flies by quickly, due in large part to the delightfully charming interactions between Ozu, M. Michel and Paloma. But what of the first half? I have to say that certain parts of M. Michel's discourse I could not easily identify with.  Notwithstanding that this is a social satire and a critique on social stereotypes, I could not quite suspend disbelief when I read the chapter in which M. Michel discusses, rather esoterically, the concept of "phenomenology". It felt like Barbery inserted her personal views there all too conveniently.

On the other hand, Paloma's wonderful and comical little insights on human behaviour more than makes up for the discord elsewhere felt. Par example - the amusing chapter about her mother fighting for (and losing) a pair of panties at a "fine lingerie" shop:

And of course Maman lost: when I came up next to her, she remembered that she is a respectable mother and it would not be possible for her, unless she wanted to sacrifice all dignity before my eyes, to send her left fist smack into the other woman's face. So she regained the use of her right hand, and let go of the panties. End result: one left with the panties, the other with the bra. Maman was in a foul mood all through dinner. When Papa asked what was going on she replied: "You're a member of parliament. You should pay more attention to the degradation of people's attitudes and civil behaviour."

On the whole, The Elegance of the Hedgehog is densely packed with, in Paloma's words, profound thoughts: M. Michel makes some very acute observations about art (being emotion without desire) and friendship (if you have but one friend, make sure you choose her well); Paloma about growing old (having to live with the certainty that we'll get old and it's now that matters) and, ultimately, what she thinks life is about:

There's a lot of despair, but also the odd moments of beauty, where time is no longer the same. It's as if those strains of music created a sort of interlude in time, something suspended, an elsewhere that had come to us, an always within never.

It is to Barbery's credit that the novel does not feel heavy at all - on the coutrary, it achieves that rare feat I like to call the sad uplift. A sad ending that concludes the novel in an unexpectedly uplifting manner, because a resolution is reached that is more important than the immediacy of that last sad event.
Posted by Vanessa Yeo at 23:52