This was a bit of a difficult read - it is bleak and at some points horrifying. Set in St John's on the island of Newfoundland in Canada, it opens with a short narrative about an alligator whose jaw snaps shut on a man's head. Or rather, a man who sticks his head into an alligator's open jaw in front of an audience. A drop of his sweat lands in the alligator's mouth. Snap. 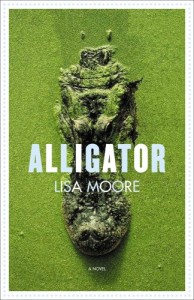 Alligator contains other disturbing, sometimes graphic scenes. However, to focus on the edgy and uncomfortable atmosphere that Moore skilfully creates is to miss some very acute observations she makes about people and relationships and the nature and inevitability of certain things.

Each chapter is written from the perspective of one of the many characters whose lives intertwine with each other in what feels like a very small town. It starts with Colleen, a 17-year-old girl who you could say is the central character of the book. She is the only one from whom we receive a first-person narrative. She is filled with an angst - an anger and a sadness - that keeps threatening to spill over. She commits several petty crimes. Her feelings are understandably complicated because her stepfather, whom she adored, died when she was much younger. We also hear from Colleen's mother, Beverly, and her aunt, Madeleine (Beverly's sister). Another main character is Valentin, who arrives by sea from Russia. He is the proverbial alligator of the story - intensely dangerous and incapable of being understood. Frank, a determined young Canuck who barrels through adversity (including his mother's death) is filled with such a pureness of heart that the reader hopes at every turn for no more hardship to befall upon him. But it does. Thankfully he has Kevin, his childhood friend, in whose chapter contains my favourite part of the book:

She left and he threw up. He could remember Kevin looking on solemnly as Frank covered both their shoes with half-digested Cheerios and watery milk. Kevin patting his shoulders as he trembled and shook with dry heaves and eventually Kevin was hugging him, and promising him full ownership of a remote-control airplane, the only toy Kevin had brought with him to the foster home.

Alligator to me dances around the notion of death, and its effects on the living. Frank and Colleen have each lost a parent they love dearly, but while Colleen deals with it by pushing boundaries, Frank stoically and doggedly sits within the path he has charted for himself. Valentin is violent and dangerously impulsive, and one can't help but feel death is not far off from where he treads. And yet the one instance he is in a position to finally kill someone off, he does not. Madeleine is dying, and reflecting upon the life that she has led. She is filled with regret. Both Frank and Loyola are hauled back from the brink of death. Both have changed.

On love: Moore goes into quite a bit of detail setting out Madeleine's past relationship with her ex-husband, whom she now misses, and separately, Frank's love for Colleen, which Colleen reciprocates, but rejects. Colleen later tries to salvage things, but we do not know in the end whether she succeeds. These were the threads that most struck a chord with me. I came out of it asking myself how many people lose love because they didn't recognise it, or had to give it up to go find themselves, or just could not deal with the inevitable heartache that comes with it. I think love is often lost unknowingly, and, by the time you realise it, irretrievably. It takes a kind of stolid wisdom and firmness of heart, and sometimes a bit of luck, for two people to find each other and love each other and know that they do and give and take and give and struggle and keep struggling to maintain that balance.

On Madeleine's honeymoon: For the rest of her life she would judge every trip against the trip and every love against this love and none would measure up. No love would ever measure up.

Check back later for my review of February, Lisa Moore's latest book, which I've already downloaded. I'm now reading The Elegance of the Hedgehog by Muriel Barbery. Thanks Cindy!
Posted by Vanessa Yeo at 21:35