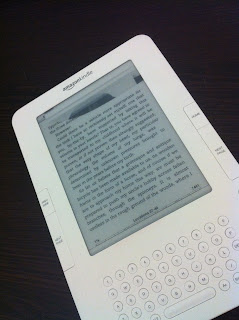 There it is, my faithful friend - broken.

I can't quite bear the thought of replacing it yet, so it's a good thing I had Nocturnes sitting steadfast by my bedside.

Nocturnes is a collection of five short stories, all centered around the theme of music and the passing of time.  I suppose it says as much on the cover, much more poetically than I ever could - "Five Stories of Music and Nightfall".

The "nightfall" part requires a bit of thinking.  Certainly there are key events which happen at night or in the evening.  But that's a bit too literal - nightfall refers to the setting of the sun on - the close, the end of - relationships in a world where too many things, from friendship to marriage, are transient.  Ishiguro seeks to capture those fleeting moments in our lives when a connection is made with someone, but that connection is destined not to last, except in memory.

Ever since The Remains of the Day, Ishiguro has established himself, to my mind, as the master of the unspoken first person narrative.  On the surface, the narrator speaks.  But if you read between the lines, there is much more that remains unspoken, whether by choice or because he or she is unaware of it.  In The Remains of the Day, the romantic tension between Stevens and Miss Kenton, so palpable but never once directly referred to, was heartbreaking.  In Nocturnes, the moments of intimacy are even more subtle.  This is no long drawn out interplay between two emotionally reticent characters;  instead, we get chance encounters, conversations that are sometimes mismatched or misunderstood, but nevertheless mean something to someone even if only for a brief moment in time.

Incidentally, nightfall could also be referred to as the remains of the day.

Ishiguro uses the theme of music with much grace and ingenuity.  If a connection between two characters is the subject matter, music is the vehicle by which that connection is achieved.  Sometimes it's about a shared appreciation of someone's skill with a musical instrument, and sometimes the baggage that goes with talent.  Other times, it's that special song, the one that brings back fond but ephemeral memories.  Ishiguro makes us realize that music forms the backdrop to so much that is important.  Music is a mood-changer.  Music is a prelude to, and a reminder of, life's turning points.  Music is that which remains constant, when everything else changes.

My favourite piece is probably Malvern Hills.  It is narrated by an opinionated guitarist who doesn't quite realize his own arrogance and selfishness, which made the story rather amusing.  But at the core of the story is an elderly couple, Tilo and Sonja, whose relationship is on a precipice.  We do not know whether it eventually goes over.  It is a common refrain, this: two people can love each other, but that does not guarantee that their relationship will last.

At the heart of this collection of stories is that feeling of desperately wanting time to stand still, but knowing that it can't:

For another moment, they remained standing there together, just beyond the pool of light cast by the front of the hotel, the bulky cello between them.

Everybody knows the feeling.  Within a blink of an eye, the moment passes.

Tibor thanked her, then before he quite realised it, he was watching her walking back towards the Excelsior.